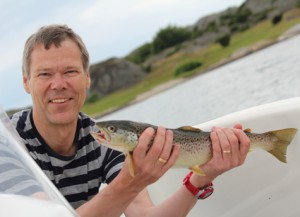 Now when it’s vacation, research progresses at a more leisurely pace. I had planned to spend much of the summer boating and fishing here in Gothenburg, but since there has been much rain and strong winds the opportunities for this have been limited. The photo shows one of the few sea trouts I have caught this summer. I hope there will be many more (and much bigger)!

In this bad weather I have instead spent some time reading. Two novels by Haruki Murakami (very good) but also some texts about gambling. I recommend the following two reports.

The first report is in Swedish and issued by the Swedish National Audit Office: The Government’s role on the gambling market – are targets achieved? (RiR 2012:15). The report provides a good up-to-date overview of Swedish gambling regulation. One of the supplements, written by law researcher Jörgen Hettne, is particularly interesting: an analysis of Swedish gambling regulation in a European Community perspective.

The main conclusion of the report is that “the Government’s actions to prevent negative gambling behavior are not efficient” and that the state-owned gambling company Svenska Spel “could take further actions to prevent addictive gambling behavior”. Naturally, this report has caused quite a stir in the Swedish gambling sector. Hopefully the critique voiced in the report will speed up the much needed update of Swedish gambling regulation. In a supplement to the report, Hettne expresses the belief that in the future, the all-European norm of gambling regulation will be a system that combines exclusive rights for particularly risky forms of gambling with licenses for less risky forms of gambling.

The other report that I wish to recommend is authored by Robert Williams, Rachel Volberg and Rhys Stevens: The population prevalence of problem gambling: Methodological influences, standardized rates, jurisdictional differences, and worldwide trends (2012). This report represents a new era in prevalence studies of problem gambling. For the first time, results from studies using different instruments and methods can be compared. This is achieved by applying weighting factors to create standardizes prevalence rates.

Analyzing the results from 202 studies of problem gambling, the authors conclude, among other things, that “there has been a general worldwide downward trend in both gambling and problem gambling rates beginning in the late 1990s for North America and the early 2000s for Australia and other nations.” This trend is explained to be a result of adaption processes following an earlier period of expansion of gambling.