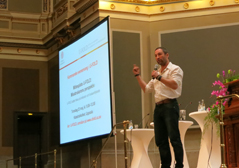 Paolo Roberto at the U-FOLD seminar

The program included presentations on many aspects of addiction and about topics relevant to practitioners in the field. Fred Nyberg, professor and chief coordinator at U-FOLD, introduced the audience to the science of addictions, with emphasis on neuroscience. Among the topics covered by the speakers may be mentioned net drugs, media strategies for the health sector, and a new app for mobile phones through which adolescents can get information about the hazards of cannabis use.

There was a panel discussion about doping in sports, in which participated among others philosopher Torbjörn Tännsjö from the University of Stockholm (holding utilitarian and hedonistic views, in principle accepting doping) and Paolo Roberto, former professional boxer who is now active in the prevention of doping. The discussion was lively. Tännsjö said he could think of taking a pill that would make him forceful enough to face Roberto in a boxing fight, with Roberto replying that it would require an extremely potent doping pill to give Tännsjö any chance at all in such a showdown.

I held a presentation on “New research finding on problem gambling”. I talked mostly about two topics. First, the Williams, Volberg and Rhys (2012) path breaking study on the population prevalence of problem gambling; second, the coming re-classification in DSM-V of pathological gambling from an impulse control disorder to an addiction, which is relevant to how treatment of problem gamblers is organized in Sweden.