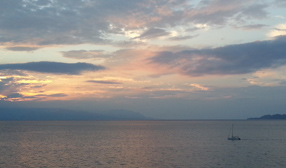 The European Association for the Study of Gambling (EASG) held its ninth conference in Loutraki, Greece, September 18-21. More than 250 participants from all over the world gathered at the Club Hotel Casino Loutraki, which is one of Europe’s biggest hotel casinos with 80 tables and over 1000 slots.

This was a great conference in a great location! This was the best of the five EASG conferences that I have attended so far. Many interesting sessions and many interesting people. A prominent theme was social gaming, which was covered in a special session.

I participated in the plenary panel session about research and also presented at a parallel session my paper: “How to assess the harmfulness of various forms of gambling: A methodological discussion from a regulatory perspective.” A Swedish version of the paper will hopefully be published this fall has been published and an English version will follow later on.

The Casino Loutraki was big but not very modern. Smoking was allowed and most of the slots belonged to previous generations of machines. Nothing like the fancy StarWars or Dark Knight video slots. But I should not complain since I won 90 Euro on the slots!

Read more about the EASG conference in Loutraki