I am honored to receive the SNSUS award 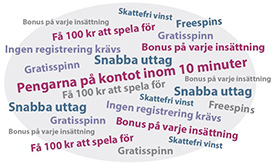 Many people felt that it had gone too far. Gambling advertising appeared everywhere and most of it promoted online casino, which nowadays undoubtedly is the most harmful form of gambling in Sweden. Appeals were made in social media, demanding an end to the massive promotion of gambling. Representatives of problem gambling treatment services and mutual support societies raised their voices. Some politicians called for a ban on gambling advertising, in general or for the most harmful forms of gambling. The Svenska Spel (the state owned gambling company) stopped promoting its online casino.

Several times a week harsh criticism of gambling advertising appeared in newspapers and on television. The Minister for Communications and Civil matters Ardalan Shekarabi – who is ultimately responsible for gambling regulation – came under heavy pressure. He handled this in the same way as numerous politicians have done in the past, in similar situations: he declared that the regulation of gambling advertising will be the subject of a government inquiry (the already ongoing Gambling Market Inquiry). Thus, nothing will happen until October 31, 2020, when the inquiry presents its report.