The impact of gambling advertising 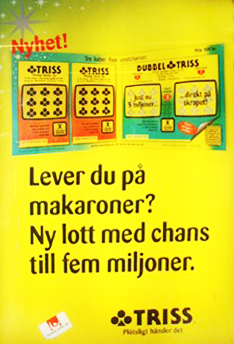 I have written two reports in Swedish on gambling adverting, which both are accompanied by articles in English. One is a literature review and general discussion, referring to the example of Sweden (full report, article). The other is an empirical study on how problem gamblers perceive gambling advertising (full report, article). The texts were published in the period 2005-2009.

A few month ago a British report was published that thoroughly discusses the impact of gambling advertising on problem gambling: The Comparative Effectiveness of Regulatory Approaches and The Impact of Advertising on Propensity for Problem Gambling (download PDF).

The report has been commissioned by the Responsible Gambling Fund. As the title suggests, it also covers the topic of the effectiveness of regulatory approaches. The authors are Simon Planzer and Heater Wardle.

The report is comprehensive and well argued. I recommend it to anyone interested in issues relating to gambling advertising. The first part of the discussion relies much on my paper from 2007 and adds some interesting thoughts. Another section deals with advertising as a trigger for disordered gamblers. There is also a section on how advertising may affect perceptions of gambling. The literature review is the most recent available at the moment.

The report concludes that measuring the impact of gambling advertising on problem gambling is a complex task. No such studies have been made. There are some evidence, however, that advertising can influence perceptions of gambling among vulnerable groups, such as adolescents and problem gamblers. Advertising may also give pathological gamblers external impulses to gamble, thereby aggravating their problems.

As to the effectiveness of various regulatory approaches in minimizing harm from problem gambling, the report concludes that there is no research on that specific topic. There is a gap between what researchers have been interested in and the discussions of policy makers and regulators. Researchers are most interested in the gaming market in terms of consumption and public health. Politicians and regulators are debating the advantages and disadvantages of various regulatory models, such as monopoly models or licensing systems. A closer interaction between researchers and regulators is therefore necessary.